Excerpt from a dramatic reading written by Bill Davis and John Schlenck for the New York Vedanta Society’s Vivekananda Festival at Ridgely on July 4, 2010. Text is from “Narendra Finds Sri Ramakrishna” by Bill Davis.

Narrator: In Sri Ramakrishna’s room — Naren sits and observes him. He thinks to himself.

Naren: There is nothing wrong in his behavior toward others. He seems to be a man of genuine renunciation. His words and actions are markedly consistent with one another. But he uses such simple language. Can this man be a great teacher?

Naren: Have you seen God, sir? 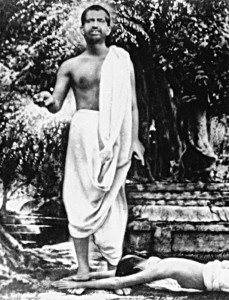 Sri Ramakrishna at the time his young disciples began to arrive. This painting was a gift; we don’t know its provenance and could not find anything about it on the Web. If you know its origin, please email that information.

Sri Ramakrishna: Yes, I see Him just as I see you here, only in a sense that is much more vivid. And if you want to see, you too can see Him. God can be realized. One can see and talk to Him as I am doing with you. But who cares to do so? People shed potfuls of tears at the death of their wives and sons and behave in the same way for the sake of money and property, but who does so because he cannot realize God? If anyone is really equally anxious to see Him and calls on Him, He will certainly reveal Himself to him.

Narrator: Naren speaks to himself.

Naren: I am impressed. Finally I have found a man who dares to say he has seen God. Moreover, that I too will be able to see Him.He may be a madman, but only the fortunate few can have such renunciation. Even if insane, this man is the holiest of the holy, a true saint, and for that alone he deserves the reverential homage of mankind!

Naren: Sir, please give me leave to return to Calcutta.

Sri Ramakrishna: Yes, you have my leave, but don’t forget your promise to visit here again soon all by yourself.

Naren: I have given my word. I shall come without fail.

Narrator: On the way home, Naren thinks to himself.

Naren: Surely he is mad, and yet why is it that I had such a strange feeling of blessedness as I sat near him? It is all strange: The adoring devotees, his unaccountable ecstasy, and then his return from ecstasy, the atmosphere of intense blessedness, his words, some strange and others clear as crystal, original and inspiring. They uplifted my soul like nothing I’ve ever known before. Surely I will visit him again soon. I feel such hope. My mind rebels but my heart knows that he will definitely lead me to God.

JOHN SCHLENCK, a composer of music, is Associate Editor of American Vedantist and Secretary-Treasurer of Vedanta West Communications. He is a resident member and Secretary of the Vedanta Society of New York.