[Reproduced from Days in an Indian Monastery by permission of The Vedanta Centre, Cohasset, MA and Ananda Ashrama, La Crescenta, CA] 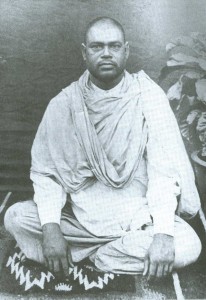 Swami Ramakrishnananda stands as a towering figure in my Indian life. He was an inherent part of it from the moment when he waited on the station platform to greet me as the in-coming train brought me to Madras, until he leaned through the railway carriage window to give a parting word of counsel as the out-going Bombay mail carried me westward. There was always a bigness and a majesty about him that impelled. He had a way of sweeping aside the belittling details of life and leaving large spaces for nobler thought and action.

I recall one afternoon when he sat on my upper verandah for four hours talking to me of God and godly living. His face was alight, his whole being seemed to glow with the exalted joy of his thought. Suddenly he rose, strode down the narrow brick stairway and along the dusty road to the monastery gate. His step was so uplifted, his bearing so lofty that as I watched him approach the gate, quite spontaneously and involuntarily I felt surprise that he was not as tall as the monastery. He looked to me taller. . .

A profound acquaintance with the Vedas by no means gave the full measure of the swami’s scriptural learning. He was an untiring student of all the great scriptures. He knew the Bible from cover to cover and expounded it in a spirit and with an understanding which are rare even in Christian countries. Every Friday at six he held a class at the Hindu Theological High School. When Good Friday came, he talked on the Crucifixion. The depth of his feeling and the vividness of his description could be possible only to one who “had seen” as Browning makes St. John say in his “Death in the Desert.”

My whole being was stirred by the living reality of his words, and as we drove home I asked how he could make them so real and living. He sat silent for a moment, then he said quietly and simply: “My Master used to tell me that in a previous life Saradananda and I were Christ’s disciples.”

Later in speaking again of Jesus he declared: “I always had a strong feeling for Christ even in my boyhood. Christ was a universal helper of humanity, He was truly a great Savior. . .”

One evening a torrential tropical storm swept over Mylapore after Arati, the Indian Vesper Service. Some Mohammedan students who were passing took shelter in the monastery. Swami Ramakrishnananda gave them cordial welcome, and then with true spiritual courtesy he began talking to them, not of the Vedas and his own form of faith, but of their religion and the Koran. His exposition of the words of Mohammed was so illuminating that the students returned every evening for a week to hear more of it. . .

Swami Ramakrishnananda’s devotion was not a surface emotion. It reached down to the deepest roots of his being. . . He had little patience with a wavering half-faith in the Higher Power. “Now we trust God only partially,” he said one day. “We think we can do many things better ourselves. We may say, ‘God, please write this letter,’ but all the time we believe we can write it a little better than He, so we do not entrust it entirely to Him. When, however, we can give up everything to Him, then we shall see how well He will serve us, for He says, of such devotees He actually becomes the servant.” 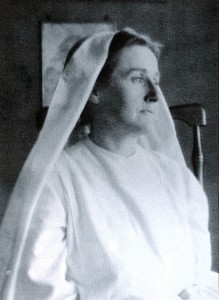 I asked him again whether steadiness in devotion meant that we must always feel the same fervor. He replied: “Steadiness in devotion means that though you may be busy with many things, still your mind is always turned toward God. It should be like the needle of a compass: the needle may swing a little to this side or that but it always has a tendency to point back to true north.

“But do not great devotees often complain of dryness of heart?”

“That very complaining,” the Swami answered, “shows that their devotion is strong, even though they may not seem to express it so well as at other times. The very fact that they are restless proves that this dryness of heart is an unnatural condition for them, just as the fish feels dryness and jumps about when it is out of water, water being its natural element. Their devotion is not lessened in any way. So long as the hunger for devotion to God is there, a man is steady in devotion.”

Shortly before I left Madras, as we were driving back from the city one evening, I expressed regret that I was leaving when he had so few to help him. The answer that came was direct and uncompromising:

. . . With all his breadth and loftiness of vision, Swami Ramakrishnananda was as humble and simple as a child. There rises before my mind the memory of one morning as he talked with me while I ate my breakfast. He sat on a light folding-chair, and as he rocked back and forth I was afraid every moment it would break under his heavy weight. The Head of the Order had arrived at the monastery three days before, and Swami Ramakrishnananda had come over to request me to go in town and make certain purchases for him. When he had finished enumerating what was needed he asked abruptly: “Sister, what do you think of our President?” My reply was: “I think he is very wonderful, but I am a little afraid of him.” Swami Ramakrishnananda leaned far forward on his chair and whispered, “So am I.”

He confided to me then that the President, Swami Brahmananda, had been scolding him gently for not being more careful about wearing the Sannyasi color. As I looked at him and saw his dress—orange to the waist, a brown chuddar about the shoulders and beneath it a pink and white striped shirt—I could not but feel that the President had some reason for his reproach.

It is very difficult to portray spiritual greatness. It is too subtle and evasive to be defined by word or line, but Swami Ramakrishnananda will draw his own portrait as he lives and speaks through these pages. This is but a first sketch. Let his own words give the final brush-stroke to it. They were spoken as the Swami sat under the tall cocoanut palms outside the monastery door. It was the evening hour. He was silent and abstracted. It was evident that his thought was wholly inward. A question or two passed unanswered. Once he looked up and said: “Excuse me, Sister, but this is a time I like to be quiet.”

Later the meditative mood passed and he began to talk, referring to certain trying conditions which had arisen. I felt rebellious that such things should come to disturb the tranquil tenor of his life and I expressed my feeling. He lifted his head, his eyes lighted up and there was an undaunted ring in his voice as he replied:

“My life is eternal. This little life belongs to God. He created it. Let Him do with it what He will.”

SISTER DEVAMATA, a devotee of Swami Vivekananda, headed the publication department of the Vedanta Society of New York in the early 1900s. She lived in India for two years (1907-1909), mostly near the Ramakrishna Math in Madras, which was then headed by Swami Ramakrishnananda. Until her passing in 1942, she was intimately involved in Vedanta work in Boston, Washington, and Los Angeles under the direction of her guru, Swami Paramananda.