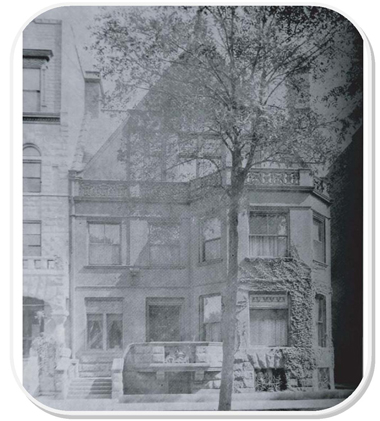 Swami Vivekananda’s work in the United States would hardly have been possible without the hospitality of American families and individuals. Among the most important of these were Mr. and Mrs. George Hale of Chicago. It was opposite their house, in September 1893, that Swamiji, disheveled and exhausted, sat on the curb after spending the night in a boxcar. He had lost the address of the Parliament of Religions. Mrs. Hale saw him and guessed that he was a delegate to the Parliament. She warmly welcomed him into her home. After he had freshened up and had breakfast, she took him to meet the officials of the Parliament. This was the beginning of a friendship that lasted throughout Swamiji’s stays in America. The Hales’ home functioned as his American headquarters. They not only hosted him whenever he was in Chicago but took care of his mail when he was traveling. Mr. and Mrs. Hale lived there with their daughters, Mary and Harriet, and Mr. Hale’s two nieces, Isabelle and Harriet McKindley.  Some of Swamiji’s most important and touching letters were written to Mary Hale. The house was torn down some years ago. 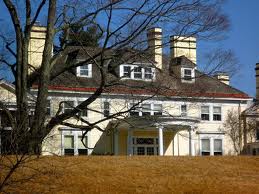 Frank and Betty Leggett were Swamiji’s hosts on three occasions when he stayed at their country home in Stone Ridge, New York, about 90 miles north of New York City. On the third of these visits, in 1899, Swamiji stayed there for 10 weeks to rest and recuperate before beginning his work in California. Betty Leggett and her sister Josephine MacLeod attended Swamiji’s classes in New York in the winter of 1895, and Frank became curious where they were going so regularly. He befriended Swamiji, gave ongoing support to his work, and served as the first President of the Vedanta Society of New York. Ms. MacLeod gave important support to Swamiji’s work in India as well as America. Ridgely manor was acquired by the Ramakrishna Order in 1999 and now functions as a year-round retreat center.

Mary Elizabeth Dutcher also attended Swamiji’s classes in New York City during the winter and spring of 1895. She invited him to live and teach at her summer cottage in Thousand Island Park on the St. Lawrence River in upstate New York. 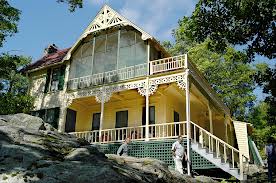 During the seven weeks he spent there in the summer of 1895 with his students, he was in a high spiritual mood. The notes of his classes, recorded by Sarah Ellen Waldo, were later published as Inspired Talks. The cottage is now under the management of the Ramakrishna-Vivekananda Center of New York and serves as a summer retreat for the Center. 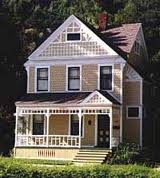 For six weeks in early 1900, Swamiji was the guest of the Mead sisters—Carrie, Helen, and Alice—in Pasadena, California. They invited him to stay at their house, along with their elderly father and two children. During this time he gave a number of important lectures in the Los Angeles area. The house is now owned and managed by the Vedanta Society of Southern California. Weekly classes are held on Sunday afternoons.