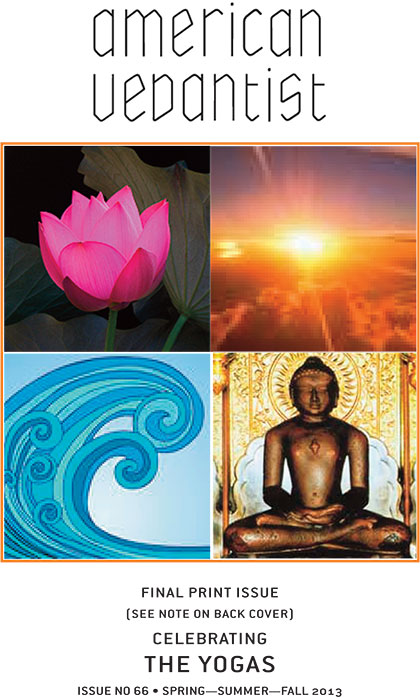 The Sanskrit word yoga means both union with the divine and the means to attain that union. Over the millennia, many kinds of spiritual discipline evolved and were called yogas.

In this issue of American Vedantist, we highlight each of these approaches in turn. They are not meant to be exclusive, and our individual paths often combine elements from two or more of the four. As Vivekananda said, “by one, or more, or all of these … be free. This is the whole of religion. Doctrines, or dogmas, or rituals, or books, or temples, or forms, are but secondary details.”

In Praise of Bhakti
by William Page

Sanatsujatiya: A Little-Known Gem Of Jnana-Yoga
by Russell Frank Atkinson

From Karma To Karma-Yoga
by John Schlenck

Opinion: What Do Swami Vivekananda And Che Guevara Have In Common?
by Sister Jayanti

Turn My Mind
by Cliff Johnson

← In Praise of Bhakti Broken Pot →