Getting Sidetracked: A Cautionary Tale 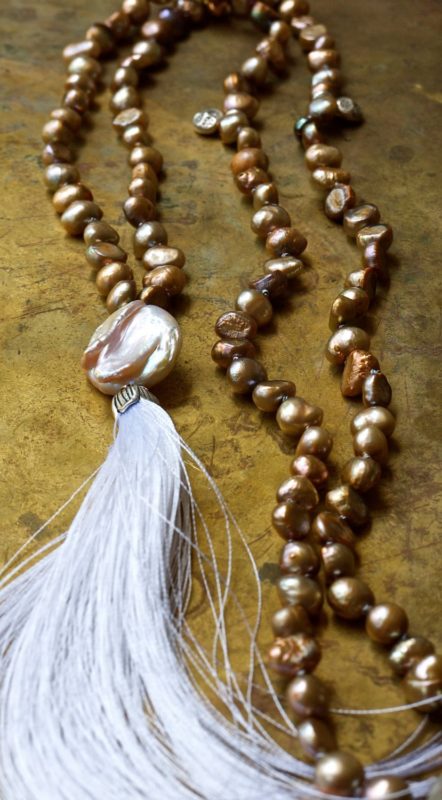 Devotees in the Ramakrishna tradition will be familiar with the rosary, or mala. This is a string of beads we use to keep track of how many times we chant the mantra when doing japa. Since the rosary has 108 beads, plus a head bead, one round of the rosary constitutes 108 repetitions.

If you think about it, the rosary embodies some nice symbolism. The beads are like jivas, or living beings; the thread is like the Atman that holds them together. Without the unifying thread, there’s no rosary; without the Atman, there are no jivas.

The rosary and the trumpet

If you check the references under “Rosary” in that wonderful and indispensable guide, the Concordance to the Gospel of Sri Ramakrishna, you’ll get the impression that Sri Ramakrishna sometimes showed an ironic disdain for rosaries and the people who use them.

Consider these quotes from the Gospel: “There are some who bargain for fish while telling their beads. As they count the rosary, with a finger they point out the fish, indicating, ‘That one, please.’ They reserve all their business for that time.” (717.)

“Aspirants endowed with rajas exhibit outward pomp—a string of beads around the neck, a mark on the forehead, an ochre robe, a silk cloth, a rosary with a gold bead, and so on. They are like stall-keepers advertising their wares with signboards.” (306.) “Go to Calcutta and you will find thousands telling their beads—even the prostitutes.” (588.)

Why such disdain for rosaries and the people who use them? Sri Ramakrishna was making fun of people who flaunted the rosary to show off their piety. To make things worse, they were flaunting it at the same time they were engaging in worldly—even immoral—activities. That degrades the rosary and makes a mockery of japa.

Jesus made a similar criticism of the people who liked to show off their piety in his time: “Beware of practicing your piety before men, in order to be seen by them….When you give alms, sound no trumpet before you, as the hypocrites do in the synagogues and in the streets, that they may be praised by men.” (Matthew 6:1-2.)

A helper on the path

Sri Ramakrishna’s attitude suggests that there’s an ambivalence about the rosary. It has a bright side and a dark side. Let’s look at the bright side first.

The rosary is an aid to meditation, a helper on the religious path. It keeps the fingers busy, and that helps to keep us from falling asleep. (Sometimes it’s not always successful, but that’s not the rosary’s fault.) If our guru has told us to do a certain number of repetitions of the mantra every day, the rosary keeps count for us, and saves us the trouble. If our minds had to be occupied with keeping count, that would constitute a serious distraction that would undermine the whole effort. You can’t keep your mind focused on the mantra if you’re trying to keep track of the number of repetitions at the same time. The rosary is a great help in this regard.

Some swamis give their disciples a rosary at the time of initiation. In 1959, as a young college student, I spent a month at the Ramakrishna Monastery in Trabuco Canyon, a branch of the Vedanta Society of Southern California. All of the monks and young novices had been initiated except me. I was vaguely aware that they had rosaries, although I never saw them. During meditation periods in the shrine, they kept their rosaries covered with their chaddars. That was in line with Sri Ramakrishna’s distaste for displaying the rosary openly. But sometimes I could hear the click of the beads.

Swami Akhilananda initiated me in Boston the following year. But he didn’t give me a rosary, and I felt a bit shortchanged. He told me that rosaries are inconvenient nowadays, and taught me how to count the repetitions on the digits of the fingers of my right hand. Readers are undoubtedly familiar with the procedure.

That didn’t seem to me to be what japa is supposed to be about. God is not an accountant, and I didn’t think he wanted me to be one, either. Especially since numbers always give me headaches.

I thought it would be simpler if I had a rosary. About that time, I joined the U.S. Army (in those days, it was enlist or be drafted), and ended up on Taiwan. Taiwan is a Mahayana Buddhist country; the Buddhists use 108-bead rosaries the same way the Hindus do. So I bought one, and did my japa with that.

Happy ending? Not quite. Here’s where we get into the dark side of the rosary. (Readers may be excused if they notice that the rosary has a dark side only if its user is an imbecile.)

An object of attachment

Viewed unsentimentally, the rosary is simply a counter. It’s just a tool to help keep track of the number of repetitions when you’re doing japa. Ordinarily you wouldn’t give it any more thought than you’d give to a pocket calculator.

But because the rosary is associated with japa, and because it’s sometimes a gift from the guru, and because you’re supposed to use the same one all your life and never replace it, we tend to consider it holy. Many devotees keep their rosary in a special bag, box, or case; they’re careful not to put it in any low or dirty place. So the rosary becomes an object of reverence and attachment.

That’s what happened to me. It happens to a lot of people who try to lead the religious life. They get sidetracked by attachment to peripherals. Instead of focusing on the essence of religion, their attention gets diverted to the trappings. The Buddhists have an analogy for this. The guru points his finger toward the moon. But the disciple focuses on the finger instead of the moon it points to. Lao Tzu also put it nicely: “The Great Way is broad and easy, but people prefer the little sidepaths.” (Tao Te Ching, chapter 53.)

Getting sidetracked can be insidious, and it led me into increasingly deeper thickets. It was like Sri Ramakrishna’s story about the sadhu who had only one loincloth. After somebody gave him an extra one, his needs gradually escalated, until finally a vast estate had grown up around him and he had to abandon the religious life to support it.

Something like that happened to me. I became dissatisfied with my Buddhist rosary. “I’m a Vedantist. I should have a Hindu rosary. And it ought to come from a holy place.” So when I visited Dakshineswar and saw the stalls selling religious items that line the road to the Kali Temple, my eyes lit up. I thought I had found the Promised Land. Brimming with joy, I bought a rudraksha rosary.

Six rosaries are not enough

Now I was the proud owner of six rosaries, and walked back to Belur Math in a happy frame of mind. But what did I see outside Belur Math but another line of vendors squatting along the roadside selling religious items—including rosaries.

“Hmmmm. Which is holier—Dakshineswar or Belur Math? Sri Ramakrishna lived and practiced austerities at Dakshineswar. But that was a long time ago, and the holy vibrations may have weakened. His relics are now interred at Belur Math. That’s the center of his Order and a powerhouse of spirituality. A rosary from Belur Math would be just the thing. It’s bound to be holier than one from Dakshineswar. Better not take any chances. Let’s get a few rosaries from outside Belur Math.”

By the time I returned home, I had a whole bagful of rosaries. But it didn’t stop there. When I went to Badrinath, I had to get a Badrinath rosary. Kedarnath, the same. Amarnath? Big problem: no rosaries at Amarnath! The cave is managed by Muslims. Strikeout on Amarnath. Mount Kailas? I had to ask an Indian friend to get one for me.

Eventually I had tons of rosaries. Was I a better person for it? No: undoubtedly worse! Each rosary represented another attachment, another fetter binding me to the world. Just as that former one-loincloth sadhu must have despaired while contemplating his vast estate, so in the dotage of my life I sat sadly contemplating the mountain of rosaries I had accumulated and despairing of salvation.

But it ain’t over till it’s over, as Yogi Berra (every American Vedantist’s favorite yogi) wisely reminds us; and finally a redeeming insight struck. If you’re wondering why it took so long, it’s because attachments inhibit insight, and I’m slow. The insight goes like this:

The fewer trappings we need in religious life, the better. Why bother our heads about beads and fingers and keeping track of the number of times we chant the mantra? Who’s counting? God isn’t. Do we expect him to give us a medal for the number of times we chant? We’re the ones who are counting, and that stimulates egoism. Are we going to boast to our fellow devotees about the number of repetitions we’ve done? Are we trying to score a mention in the Guinness Book of World Records? Are we trying to run the japathon or the 108-bead dash?

So renounce the rosary, forget the fingers, stop counting. Just do japa in a continuous flow. Do it as often as you can for as long as you can.

That was the insight I got. I leave it to the reader to decide whether it’s any good. Putting it into practice is another story.