The Symphony of Religion 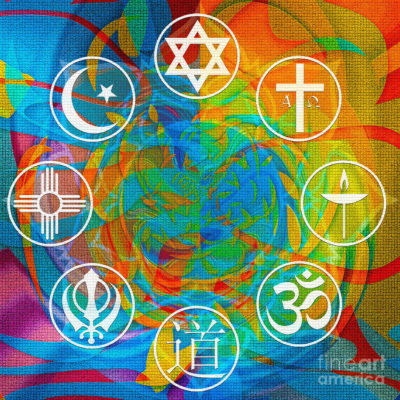 My title is, the symphony of religion.  Sri Ramakrishna used to say, “Why should I be monotonous?  A flute has many holes; shall I go on playing one note over and over?  Why not sound all the notes, using all the holes to play a merry tune?” He wanted to enjoy God through the many ways in which He has been found.  And he reported that he discovered the same truth at the summit of each religious path. It was my fascination with this man and his extraordinary life that drew me into the orbit of Hinduism, or as I prefer to call it, Vedanta.  Ramakrishna, you know, was the most wonderful combination of spiritual profundity and spontaneous joy.

So today I want to talk to you about three things: conversion, organization and mutual irradiation.

First, conversion.  Huston Smith, whom you very well know, announced in his first interview with Bill Moyers that he was a member of the Methodist Church, and he came from missionary parents. I have to tell you that my name is still on the rolls of the Presbyterian Church and my parents too were missionaries.  By my definition, I am still a Christian and will continue to be so. Who defines what is a Christian?  And a convert?  Do you realize that the entire concept of conversion arises only in the context of Western religions, with their labels and their membership rolls? It is not universally applicable.

Scholars give us two meanings for this word.  One is that upheaval, usually sudden, in which a life is turned away from “worldliness” and in the direction of holiness.  As Buddha said, “from self-seeking to self-sacrifice.”  “Make me a clean heart, O God, and renew a right spirit within me,” sings the psalmist.  In this sense I cannot be called a convert because yearning for the holy came to me in early childhood and has been a long continuous process — one little conversion after another, if you like. The other meaning of conversion is to migrate from one religious framework to another, as if changing ones citizenship and entering another closed circle.   Nor am I a convert in this sense.  What did I turn away from, or against?  Of what did I repent?  How was I reformed?  As Seneca said, when accosted for his new views, “I am not reformed, I am transfigured.”  I suggest to you that we are faced here with augmentation, not conversion. How wonderful it is, my friends, to be able to celebrate the ceremonies and sympathize with the sacredness, of Buddhists, Muslims, Christians and Jews, Sikhs and Hindus and the Bahai!  Don’t you agree?

Conversion also implies organization, and I must remind you that Hinduism does not have a centralized power, nor pope, nor dogma nor a closed canon of scripture.  It is not an organized religion.  Let me tell you a story.  When Swami Vivekananda was staying in Chicago he once confided to his hostess that in America he faced the greatest temptation of his life.  Smiling, she asked him “Who was she, Swami?”  He burst out laughing.  “Oh, it wasn’t a lady,” he replied,   “It was Organization.” And surely you know that other tale about the devil being asked what he would do with Truth, if he ever got hold of it.  “Why,” he answered, “I would organize it!”  In India it is often regarded it as the devil’s own work.

Organization can mean strength.  It is necessary to provide structure, for spreading a message, for the stability and permanence of any movement.  Sri Ramakrishna said that all spiritual paths lead to the same summit, but this does not mean that it makes no difference which path we tread. It is vital that we remain on a path suitable to our nature and our experience.  But organization can also bind us fast.  Now our first encounter in life with an organization, is the family, and great as this is, it must not be allowed to infringe upon our spiritual quest.  I was fortunate.  Mine was a liberal family, and yet they tried to prevent me from taking these steps.  (So strong were the Protestant-Catholic antipathies in those days, I do believe my mother was less distressed by my becoming a Hindu monk than she would have been if I had become a Catholic one!)

Schools are the next organized institution we come to.  Fortunately we are graduated, as we say, from schools.  Another is the church, or denomination, cult or sect, or, in my case an order.  Sometimes we have to be graduated from these.  As Swami Vivekananda reminds us, religious organizations are the golden chain which, however beautiful, is not less strong to bind.  “It is good to be born in a church,” he said, “but not to die in one.”  Every one of us needs to outgrow the organization if it holds us back from that for which it solely exists: discovery of the deeper reality within us and without, the Universal Spirit.  Again let me say, freeing oneself from a limiting organization does not mean to decry it: it means expanding oneself into a larger fellowship.  We never come to truth from outright untruth ; we always go from truth to truth

You must have heard the buzz-words of our current crop of theologians: they talk of exclusivism, inclusivism, and religious pluralism. I do not think I have to define those for you.  The Quaker seer Douglas Steere provided us with a better term: “mutual irradiation,” he called it.  Not tolerance, nor co-existence, but benefiting from one another.  Look at Christianity itself: how internecine warfare has robbed us of this benefit.  Freud used to speak of the “narcissism of minor differences.”  You know it all too well: Reformed and Christian Reformed!  Catholic-Protestant conflict has blinded both sides to the greatness in the other.  Steere tells the story of a Methodist pastor who wired his bishop for permission to bury a local Baptist. The reply came: “Permission granted.  Bury as many Baptists as you can.”   Mutual irradiation means to practice our own religion intensively and to radiate, to share our experiences with each other in celebratory ways; it does not mean some monolithic synthetic structure.  Transfers may occasionally take place but “conversion” is not sought.  We should also engage in projects together (like Habitat for Humanity) where, by working side by side, we come into mutual irradiation.  Thus we approach others with love and respect, suspend preconceptions in order to listen, postpone value judgments, then witness to our own experience.  We acknowledge that differences exist and differences matter.

Christianity itself has depths unexplored by people of our time.  What happens is this: rational persons, becoming skeptical of spiritual truth when idols and ideals reveal their feet of clay, become disheartened and sink into materialism. They do not know how to use their skepticism to their advantage.  Sri Ramakrishna knew how.  He plunged into a depth-investigation, asking if there were any divine reality behind the image made of stone.  No one doubts that he found it.  Here is a quotation from Fr. Bede Griffiths, “The West,”he says, “stands in danger of neglecting the life of contemplation and it is important for it to have contact with the revitalized life of contemplation in Hinduism which some of the l9th and 20th century figures like Ramakrishna and Vivekananda have done so much to further.”

The deeper we search the more radiance we find.  Look, for example,  at the sacrifice and heroic life of the Buddha, and the ideals of non-violence and compassion in both Buddhism and Jainism.  In Judaism see the value given to family, to the race, the stability of a society in covenant with its God, yet the transcendence of that God.  Look at Islam: unfairly criticized, the Muslim stands as a monument to the equality of brotherhood, fidelity to prayer and scripture; note the literary quality of the Kor’an and the faith’s cultural contributions to civilization.  Christianity gives us the beautiful life of Jesus, the grace and Fatherhood of God, loving charity and social service.  Hinduism’s beauty lies in its high philosophy, its breadth and depth, and hopefulness, and the Motherhood of God.  Do not tell me you can look upon all this and still be a religious philistine!

How have  Hinduism and Western culture radiated one another?  Hinduism has become more organized and more self-conscious; it has altered its focus to include the nation, not the individual alone.  But is it religion that is responsible for this?   It is more likely that it is the effect of all the trends of modern industrial society.  On the other hand, influences of Hinduism on the West are obvious: it has brought us yoga, meditation and other mental and spiritual disciplines, a greater variety of relationships to the Divine, and opened the possibility of a science of religion.  Many have found in Vedanta a deeper understanding of their own faiths and a larger framework for throwing light on religious conflict.   Of course this has also brought on a “backlash” from the fundamentalists and evangelicals who never seem to understand how a person may integrate two or more faiths in the same life.  Thomas Merton, Bede Griffiths, Huston Smith and many others have been able to do this.  It is a matter not of conversion, but of convergence.  In my case, I found it essential for the fulfillment and expression of my own inner nature.

Think of this  planet of ours; what once were isolated tribes living on different continents have learned the languages of one another and become communicating communities. Why not evolve further and become participating partners in the work of the Spirit?  Friends, I made a migration to greater openness of mind and heart, enabling me to enjoy the playing of all these notes on the flute of spirituality.  I ask you similarly to listen to and enjoy all the sounds of the world’s great faiths.   Yet, sharing one another’s culture or “ethnicity” is only an overture: it is by grasping the core, the essence, of faith and practice, that we will ultimately hear the symphony our religions are already playing.

Swami Yogeshananda is a senior monk of the Ramakrishna Order of India. Age 95, he has retired to the Vedanta Society of Southern California’s Trabuco Monastery in the Santa Ana Mountains of Orange County, California. The swami can be contacted at
swamiyogeshananda@gmail.com.