My guru, Swami Prabhavananda, was a direct disciple of Maharaj, as Swami always referred to Swami Brahmananda. In fact, in the more than twenty-five years that I knew Swami he never referred to his guru by any other name. And though Swami Brahamananda was known throughout the order as Maharaj, when Swami used it the name seemed to be given a special warmth and respectful familiarity. We all knew that Maharaj occupied a very holy place in Swami’s heart. 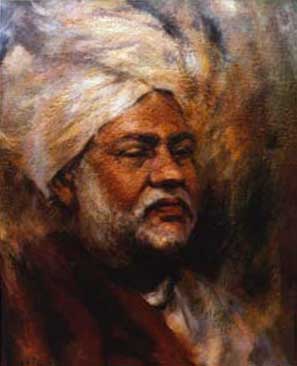 A painting of Swami Brahmananda (Raja Maharaj) by Swami Tadatmananda

We monastics had the special privilege of assembling in Swami’s room after pujas or on other occasions. He would sit cross-legged in his large, over-stuffed reading chair, and we would sit in three neat rows on the large Oriental rug in front of him. He would encourage us to ask questions. But too frequently awkward silences hung heavily over the room. One of the monks told me that during those silences “I memorized every detail of that carpet!”

However, we knew one trick to break the ice. We would ask Swami to tell us something about Maharaj. A smile could brighten his features and out would tumble memories of his guru. “You see,” he would begin, “Maharaj never asked us to perform any disciplines. Hard austerities. He asked us to do puruscharan [chanting japa for a specified number of times] for a year and perform the worship, but that was all. On three occasions he asked me just to love him. Once I was facing the mantle when he approached me from behind and whispered in my ear: ‘Lovest thou me?’ I was paralyzed. When I turned, he was walking out the door.”

For many of us that was a familiar story, one that was found in his intimate biography of Maharaj, The Eternal Companion. But to hear him tell it, no matter how many times, brought us joy. “You see, Maharaj was like a king, a raja, but he could also be just like a little boy, too. If he was in the presence of children, he would hide behind a wall and then jump out to scare them. He was something!”

In his later years, after finishing breakfast at the Trabuco Monastery, he would stand in front of the large picture of Maharaj on the refectory wall. After quietly saying, “Excuse me,” he would remove his shoes, and remain with head bowed in front of the picture. After proceeding to the courtyard, the same ritual would be repeated in front of Vivekananda’s statue.

It has been related to me that Swami once had a vision of Maharaj walking the outer corridors of the Monastery at Trabuco. I have also heard that he saw Holy Mother there as well.

“I was very drawn to Maharaj”

“Even before I joined the monastery,” he told us, “I was very drawn to Maharaj. He had a special chair he would use on the veranda of the Monastery. On one occasion, when Maharaj was absent, I found an elderly Swami sitting in that chair. At once I went up to him and said, ‘Sir, you cannot sit there. That is Maharaj’s chair.’ And I begin to pull him out of it.

“He smiled at me and said, ‘Oh, I don’t think Maharaj will mind.
“At that moment Maharaj arrived and with a smile sat in the other chair. I was a little embarrassed. As I walked away I could see they were looking at me and chuckling.”

To honor his guru, Swami Prabhavananda started the Swami Brahamananda puja at the Vedanta Society’s Hollywood Center. During this ceremony Swami’s mood was always elevated. Once I noticed that as he was leaving the temple to go to his room he was obviously in a spiritual state. He was unsteady on his feet and had to be supported by one of the devotees who was walking with him. When we monks assembled in his room after the ceremony, his reminiscences of Maharaj replaced all other talk. It seemed as though on that day his heart was truly joined to his guru.

It seems appropriate here to say a word or two about guru bhakti — love of the Guru. It is no ordinary love. Hindus consider the guru a deeply, largely unspoken significance in their lives — equal with God.

The guru and the aspirant

In his The Spiritual Heritage of India, Swami Prabhavananda certainly had his own guru in mind when he wrote: “The aspirant therefore must associate with one who is competent and holy… who has demonstrated the truth of religion in his own life, and who can therefore initiate the disciple into the secrets of spiritual unfoldment.”

Swami Vivekananda also writes of this relationship in his Bhakti Yoga: “Without faith, humility, submission, and veneration in our hearts toward our religious teacher, there cannot be any growth of religion in us…. Where this kind of relation between the teacher and the taught prevails, there alone gigantic spiritual men are growing.”

Later the Swami states what many of us in the West already know and, in many cases, persuaded us to become Vedantists. “In those countries which have neglected to keep up this kind of relation, the religious teacher has become a mere lecturer…expecting his five dollars [no megachurches then!] …. Religion which is the highest knowledge and the highest wisdom, cannot be bought, nor can it be acquired from books.”

Let us not indict books too harshly, however. Many of us were brought to the teachings of the East through a spiritual book discovered in a bookstore or in a friend’s home.

This latter was true in my case. When I was quite young, I was visiting a close friend, who was a Vedantist. I saw a book on Holy Mother resting on a table in her apartment and my curiosity was aroused. I was about to pick it up, but she restrained me. “This is not for you yet.” This proved true, for I was initiated several years later.

Though books are wonderful companions, let us still heed Vivekananda’s words that “wisdom…cannot be bought, nor can it be acquired from books.”

However, there is one book that must be read if one is to fully appreciate the deep spiritual character of Maharaj. That book, mentioned earlier, is The Eternal Companion, which Swami wrote and Vedanta Press published in 1947. He often told us that while writing it “I would often smell a wonderful fragrance. Though I searched for the source, I never found it. Then I realized Maharaj was blessing me.”

In the Introduction he writes of his first attraction to Maharaj: “When I first met Maharaj I was a boy of eighteen. I did not know anything about God or the realization of God, yet I felt drawn to him as to a long-lost friend who was very near and dear to me. I never felt such love before in my life. It was the love of parents and the love of a friend, all in one.”

On one occasion, he was with an older swami and Maharaj. “The swami looked at me and asked Maharaj, ‘When is this boy going to be a monk?’ Maharaj rubbed the top of my head and smilingly said, ‘When the Lord wills.’ I joined the Order soon after.”
Later, when he was still a young monk, Swami was walking by a room at the Monastery when he noticed the door slightly ajar. “I looked inside and saw Maharaj in samadhi and dancing in bliss. Not wanting to disturb him, I slowly closed the door and went away.”

I regret not seeking his blessing

“To this day,” he told us, “I regret not approaching him, taking the dust of his feet and seeking his blessing. But I felt unworthy to do so.”

“Maharaj had a powerful body,” he once told us. “And we found that out when he was walking with two of us over an open field. Suddenly we noticed a bull at some distance rushing toward us. We immediately stepped in front of Maharaj to protect him. But he pushed us aside as though we were feathers, and stared straight at that oncoming bull. When the bull was nearly on us, it suddenly stopped, shook its head, and then trotted off. Maharaj was always there as our protector.”

Those of us who were Swami’s disciples were very fortunate to receive these vivid impressions of Swami Brahmananda, who is often seen by others as somewhat remote and forbidding. Swami made us feel he was a man of great spiritual depth who lived largely in another, hidden world. But, at the same time, he could be warm and affectionate and often display childlike behavior.

Swamiji referred to him as “Raja”

Maharaj was not the world traveler and brilliant orator of a Vivekananda and unlike many of his brother disciples he wrote no books nor carried on a wide correspondence. But his brother monks, and especially Vivekananda, well knew the profoundly deep mystical nature of this spiritual son of Sri Ramakrishna. It was for this reason that Swamiji, who always referred to him as “Raja,” appointed Maharaj as the first President of the Ramakrishna Order. He served in this capacity until his death in 1922.

The spiritual greatness of Maharaj was often noticed by others who did not know him. Swami relates the following incident in The Eternal Companion: “Once in a crowded railway station, I overheard a man who had been observing Maharaj exclaim to a friend: ‘Look at that man. What part of India does he come from? He isn’t like a Madrasi or a Parsi or a Bengali or a Punjabi. Can you guess his nationality?’

‘And the other answered, “No I can’t. But you can very well see that he is a man of God.’”

CLIFF JOHNSON (Bhuma), a devotee at the Vedanta Society of Southern
California for more than 50 years, is a former editor of Vedanta and the West.