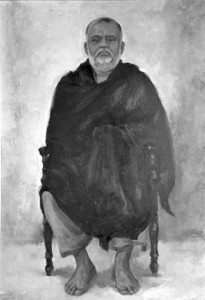 Sri Ramakrishna recognized Rakhal as his “spiritual son.” Ramakrishna said of him, “Know that Rakhal has intense renunciation. His father is rich; he does not go to him. He lives here, gathers fuel from the woods, and cooks his simple food.” (Recalled by Swami Turiyananda, Almora, 1915)

Swami Brahmananda (known to his fellow monks and to devotees as Raja Maharaj) was the first president of the Ramakrishna Order. He was born Rakhal Chandra Ghosh at Sikra, a village near Calcutta, on January 21, 1863. While in high school he met Narendranath (Swami Vivekananda); this relationship quickly developed into friendship.

After the death of Ramakrishna, Rakhal, along with Narendra and other disciples of Ramakrishna, became monks. Swami Brahmananda then spent some years as a wandering monk; he came back to the Baranagore Math before Vivekananda returned from his first mission to the West. After Vivekananda established the Ramakrishna Mission he gave Raja Maharaj the responsibility of running the organization. He remained President of the Order until his death in 1922.

Swamiji to Raja Maharaj: The good live for others alone!

“In any towns or villages you may visit, start an association
wherever you find a number of people revering Sri Ramakrishna. Have you travelled through so many villages all for nothing? … If one has got power, one must manifest it in action. … There is only one way in the world — “The good live for others alone”, “The wise man should sacrifice himself for others”. I can secure my own good only by doing you good. There is no other way, none whatsoever… You are God, I am God, and man is God. It is this God manifested through humanity who is doing everything in this world. Is there a different God sitting high up somewhere? To work, therefore!” — Vivekananda in a letter
to Raja Maharaj, written from the U.S. in 1895