(Please see Chaitanya’s Prayer: A Perfect Primer – Part I for Part I of this article.)

(Please read the Prayer, down to the line, “So vast is Thy mercy.”) 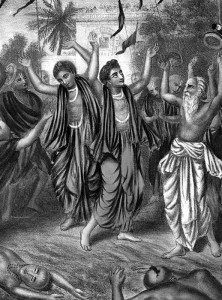 Having celebrated the Lord’s omnipotence, liberality, and compassion, Chaitanya now speaks for the first time in the voice of the devotee. In three stunning lines the aspirant confesses —

HOW HUGE, THEN IS MY WRETCHEDNESS,
WHO FIND, IN THIS EMPTY LIFE AND HEART,
NO DEVOTION TO THY NAME…

This is the crux, the turning point, of Chaitanya’s Prayer — this recognition that, though the Lord offers to take the yoke from his heavy-laden shoulders, the devotee is as yet unbending and cannot kneel so that the yoke can be removed.

What courage it takes to make such a statement! This is not the mea culpa of a weakling; it is a powerful, honest recognition of bitter truth — the aspirant’s wretchedness is of his own making. As Swami Ranganathananda wrote, “(You) deny yourself in surrender to God, through super strength. That is the correct attitude and way… when you are strong and spiritually mature… you look up and see a greater courage and a greater strength beckoning you, which makes you experience and say: ‘Not I, but Thou; Thy will be done!”

And so the aspirant’s soliloquy continues — first directed within:

O, MY MIND,
BE HUMBLER THAN A BLADE OF GRASS,
BE PATIENT AND FOR-BEARING LIKE THE TREE,
TAKE NO HONOR
TO THYSELF,
GIVE HONOR TO ALL,
CHANT UNCEASINGLY THE NAME OF THE LORD.

Now the game is well and truly on, isn’t it! The devotee reviews, step by step, what must be done to break his unbending pride, to gain devotion. Swami Yatiswarananda once told a young man who is now a senior monk in the Ramakrishna Order, “For every one step forward spiritually, you must take two steps ethically!”

Humility, patience, forbearance, modesty, magnanimity — those are ethical steps. And then the repeated “memo to self”: Let nothing deter me from chanting the Holy Name.

Next, addressing the Lord, the devotee affirms that he no longer yearns after the attractions of a worldly life:

O, LORD AND SOUL OF THE UNIVERSE,
MINE IS NO PRAYER FOR WEALTH OR RETINUE,
THE PLAYTHINGS OF LUST OR THE TOYS OF FAME;

Instead, the aspirant now prays for the highest:

AS MANY TIMES AS
I MAY BE REBORN
GRANT ME, O LORD,
A STEADFAST LOVE
FOR THEE.

A quick note about being reborn: Listen to this verse from the Devi Mahatmyam (700 Mantras on Sri Durga, the Divine Mother) — “Salutations be to you, O Narayani, O you who, in the form of minutes, moments and other divisions of time, bring about change in things, and have thus the power to destroy the universe.”

Based on this premise, and on Sarada Devi’s promise that, “Even the injunctions of destiny are cancelled if one takes refuge in God…”, it is possible to think that you do not need to wait for another lifetime for your life to change. It’s possible you can be reborn, and Mother can grant you that precious, steadfast love for the Lord this instant, this very instant.

Since we can’t imagine that any word of Chaitanya’s Prayer was written carelessly — he was, after all, a master logician — it could be that in these next, very dramatic lines, the Mahaprabhu also makes a small joke, a clever play on words. He wrote:

A DROWNING MAN IN
THIS WORLD’S FEARFUL OCEAN IS THY SERVANT,
O SWEET ONE.
IN THY MERCY
CONSIDER HIM AS DUST BENEATH THY FEET.

If, in His mercy, the Lord makes you part of the dust beneath His feet, it’s pretty clear your drowning days are over — where is the world’s fearful ocean then? Naturally, there’s much more to these four lines than a sort of spiritual jest; in seed form, they point toward one of the relationships one can have with the Divine — the attitude of a servant.

For indeed we are — whether willing or not — a servant of the Divine Will! As Sri Sarada Devi said plainly:

“Listen, dear, when God first created man, He endowed him with the spirit of goodness. As a result, men were born with wisdom and it did not take them long to realize that the world was an ephemeral thing. Immediately they took the Name of God and set out to meditate on Him and by His grace were liberated from the bonds of life. God thought, ‘This will not do, this is not the way to make them play the game of life.’ In the end, along with the spirit of goodness, He mingled in profuse quantities of the spirit of materialism and that of vanity. Now the game of life went on with a swing!” (That quote starts on p. 212 of In the Company of the Holy Mother, By Her Direct Disciples.)

Think of what She said: Each of us is serving to make God’s game of life go on, and with a swing, no less! No doubt that’s because, as the great old song lyric says, “It don’t mean a thing, if it ain’t got that swing!”

Swami Prabhavananda was fond of saying, we should give every aspect of our lives a “Godward turn.” To apply that thought here, perhaps Chaitanya is suggesting that —since we do serve the Lord’s purposes — it’s best if we purposefully remind the Lord we are His servant and ask for his merciful protection.

Ramakrishna once said to M. (who wrote the Gospel of Sri Ramakrishna) “…(I)n order to realize God, one must assume one of these attitudes: santa, dasya, sakhya, vatsalya, or madhur… Dasya (is) the attitude of a servant toward his Master. Hanuman had this attitude toward Rama. He felt the strength of a lion when he worked for Rama…”

In the next lines of Chaitanya’s Prayer, we hear a devotee whose transformation is nearly complete. Unceasing repetition of the Lord’s name has filled the devotee’s being with the Lord’s presence; any thought of worldly achievement or pleasure has vanished. All that remains is an intense yearning for union with the Beloved (called Govinda, a name of Krishna). Chaitanya writes:

AH, HOW I LONG FOR
THE DAY WHEN AN
INSTANT’S SEPARATION FROM THEE, O GOVINDA,
WILL BE AS A THOUSAND YEARS, WHEN MY HEART BURNS AWAY WITH ITS DESIRE AND THE WORLD, WITHOUT THEE, IS A HEARTLESS VOID.

Many great devotional mystics have echoed this abandonment of self to the Divine. Half a world away, a contemporary of Chaitanya put his very similar passionate longing into these words — they are from The Imitation of Christ, by Thomas a Kempis, a 14th and 15th Century German mystic:

“O Thou Beloved: Love eternal, my whole Good, Happiness which hath no bounds, I desire to appropriate Thee with the most vehement desire, and the most worthy reverence. I desire to reserve nothing unto myself.

O everlasting light, surpassing all created luminaries, flash forth Thy lightning from above, piercing all the most inward parts of my heart.
Make clean, make glad, make bright and make alive my spirit, with all the powers thereof, that I may cleave unto Thee in ecstasies of joy…”

… that I may cleave unto Thee in ecstasies of joy. Amen!

Chaitanya, in the last nine lines of his Prayer, summarizes the final stage of his devotional spiritual practice, the Madhura Bhava —roughly translated, the Sweet Mood. This is the completely selfless attitude represented by the relationship of Sri Radha to Sri Krishna, in their lila in Vrindavan. Sri Ramakrishna called the madhur attitude Chaitanya’s greatest contribution to the spiritual world. Ramakrishna said, “Madhur (is) the attitude of a woman toward her paramour… This attitude includes all the other four.”

The last nine lines of Chaitanya’s Prayer are:

PROSTRATE AT THY FEET LET ME BE, IN
UNWAVERING DEVOTION,
NEITHER IMPLORING THE EMBRACE OF THINE ARMS
NOR BEWAILING THE WITHDRAWAL OF THY PRESENCE THOUGH IT TEARS MY SOUL ASUNDER.
O THOU, WHO STEALEST
THE HEARTS OF THY
DEVOTEES, DO WITH ME WHAT THOU WILT —
FOR THOU ART MY HEART’S BELOVED,
THOU AND THOU ALONE.

Shall we think of this poetry as only an intense description of the ultimate state the devotee achieves by chanting the Name of the Lord and His glory unceasingly? It is that, of course, but according to Swami Saradananda — one of the foremost direct disciples of Sri Ramakrishna — there is a great philosophy behind it that accurately describes the truth of our Being.

In his book The Great Master, Saradananda writes:

“Chaitanya at first placed before (spiritual) aspirants the ideals of extraordinary renunciation and detachment by practicing them in his own life, and afterwards pointed out that if one became pure and holy and looked on oneself as a woman and on God as one’s husband, one can truly realize the unlimited divine bliss in the subtle ideal world.

(He taught that) Sri Krishna, the supreme Self, the embodiment of Existence-Knowledge-Bliss (Satchidananda), is the only… Male principle and all the Jivas and creatures, both gross and subtle, are… embodiments of supreme love, and are, therefore, His wives. So, if Jivas become pure and holy and whole-heartedly worship Him as their husband, they attain by His grace liberation and unlimited bliss, the goal of their lives. This is the long and the short of the Madhura Bhava preached by Chaitanya. All the other devotional moods are included in (that) one great mood…”

That great mood seized another charismatic devotee of Krishna — a 16th Century Rajput princess who became the renowned singer, and some say saint, Mirabai.

This is from the Introduction to a collection of her works, titled For Love of the Dark One: Songs of Mirabai:

“Tales of Mirabai still circulate. One recounts how, on reaching the vicinity of Vrindavan, the woodlands sacred to worshippers of Krishna, she encountered the famous theologian Jiv Goswami. This redoubtable scholar and fearsome ascetic denied her access to one of Krishna’s temples because she was a woman. Mirabai shamed him with the words, ‘Are not all souls female before God?’ Jiv Goswami bowed his head and led Mira by the hand into his temple.”

Returning to Saradananda’s The Great Master:

“Although in the eyes of modern (people) the Madhura Bhava appears to be unnatural and unbecoming for those who have male bodies, it does not take long for a Vedantin to ascertain its proper value… The consciousness of ‘I am possessed of a body,’ which is the basis of all other impressions of the human mind, and the firm belief, ‘I am a man or a woman,’ on account of contact with that body, are two Samskaras (ingrained habits of thought) that are most powerful.

“When the male aspirant is able to forget his male nature by attributing the nature of the husband to the Divine Lord and of the wife to himself, he, it is needless to say, can very easily throw off as well the mood “I am His wife,” and reach the state beyond all moods. Therefore a Vedantin finds it quite reasonable that an aspirant, when perfect in the discipline of the Madhura Bhava, should arrive very near the plane transcending all moods.”

That perfection, says Chaitanya, is the goal, the end. The beginning is:

CHANT THE NAME OF
THE LORD AND HIS GLORY UNCEASINGLY THAT THE MIRROR OF THE HEART MAY BE WIPED CLEAN
AND QUENCHED THAT MIGHTY FOREST FIRE,
WORLDLY LUST, RAGING FURIOUSLY WITHIN…

BR. SHANKARA is Resident Minister at the Vedanta Center of Atlanta.