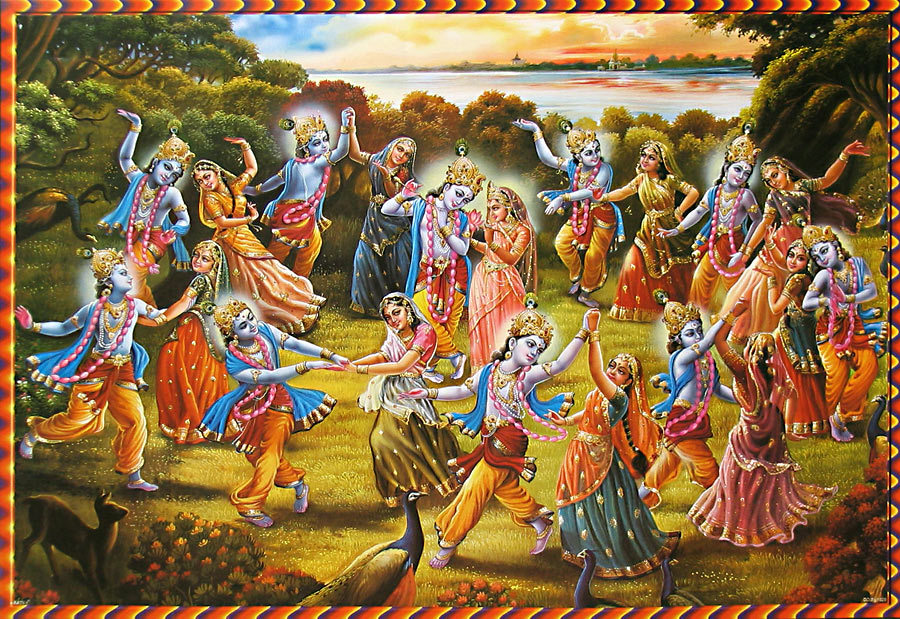 There is a Hindu doctrine that the universe and life are the outcome of a joyful creative spirit at play. Evolution is play and our human life is too. They call it the Ras Lila—divine play.

I suppose it must seem, at best, a poetic piece of fantasy to most people in this rational age, though there are few alternative explanations offered. I think that the universe and life in it is so preposterous a thing that no logical and sensible assumptions can be made to explain the reason for their presence. Any possible reasons are therefore likely to be just as preposterous and incredible as the presence of life and the universe is. While purpose might be doubtful, we can see that evolution has a direction. Compared to early forms of life, especially the human species, the obvious direction is toward a heightening of intelligence, grace and beauty, though I would not claim this fact to constitute a purpose. Why the direction and what is its source? The Ras Lila and its philosophical background provide an answer. Children, who have by nature wisdom early lost, know that life is a game. Ask a child what life is about and they will say, playing of course.

Music is made by manual dexterity on various instruments, yet we don’t say that one is manipulating the instrument (which is strictly accurate) but playing it. Sports grounds are called playing fields. Actors are called players. Representations of life on a stage are called plays. The word acts in too many ways to list; play about, play cards, play tricks, play around, play down, play for time, play a fish, play the field, play of light or water, or we can play on another’s feelings, and so on and on.

The word play is so much a part of our life and language—should we not suspect it to be an integral part of creation itself?

Old timers like my dad had it right when in order to know what work someone did would ask, ‘So what game are you in?’ Rudyard Kipling called international spying The Great Game. Sport, which captures the attention, dedication, obsession, passion, and intense interest of the majority of humans, is Ras Lila to its devotees.

Even the paradigms within which societies, nations and minor groups function can be seen to be similar to the lines on a playing field, within which their various games are played. All our games have the same nature of life itself; an attempt to achieve something, to reach a goal against some forces that obstruct, be it gravity as in gymnastics, seething waters as in kayaking or other burly blokes as in Rugby.

Team sports involve both cooperation with others and contest with others, just as being alive does for all life forms. Sport requires rules and circumscribed areas marked by lines defining limitations, just as society does with its by-laws, statutes and so on. As in football, if you break the rules you are sent off the field. If you continue doing it you get banished from playing the game. It must be significant that these themes are consistent right throughout life.

Consider life-games such as chess and dice. Chess is the game of life on a chequered board of days and nights. Dice is of numbers given values on a four-sided cube where chance determines the winner or looser, something we humans find fascinating because of the unknown, unexpected possible outcomes. Can it be said that these games have any other purpose than an opportunity to play? Play is the juice of games as of life. That is why games of chance are the most compelling. So are sports that involve the danger of death or severe injury such as hang-gliding, mountaineering, or leaping out of airplanes. Because it is the game of chance with the highest stakes, the epitome of this is Russian roulette. . .

Being alive in the world can be seen as a sort of game. We have ambitions, or if not, imperative needs that need filling. There are rules, limitations or handicaps as obstacles to their attainment – the very nature of game. We go on winning and losing until the game is up and we die.

We play our games of life on a court composed of night and day, four seasons like the sides of dice, and of years. We are tossed about in endless cycles of want and plenty, sun and rain, war and peace, times of expansion and times of contraction in cycles of seasons, just as all the cosmos does. Seeing that the nature of game is so universally pervasive is it not reasonable to consider that it may be cosmically determined?

To see how this might be possible, it is necessary to consider the Ras Lila idea in the context of Vedantic cosmology in which the cosmos is not created as one would make a pot, but projected from an utterly Absolute Being to a Supreme Being from whom nature and all dualities and relativities appears like a holographic image on thin air. The Supreme Being is not absolute but part of the relativity it gives rise to. This being is called God in dualistic religions. As there can be no being, absolute or relative, without consciousness making its presence known, consciousness and being must arise simultaneously. Thus considered, creation is not made of atoms and molecules but of consciousness; and this consciousness is joyfully playful.

The ideas of heaven
elsewhere and other,
out of reach,
remote, beyond,
makes us exiles in a dark land,
and God, an absent landlord, who,
leaving error and death
in charge of the old estate,
sits in some utter and antiseptic corner
of the cosmos;
muses;
dreams perfection.
But heaven is now!
The infinite present
pregnant with life’s life –
innocent as an egg
or a full moon morning’s
sea of joy.

Thus God in Hinduism is not a stern patriarch or a dour lawmaker but a Supreme Being who is joyful, and when manifested as the avatar Krishna, is a competent athlete who plays a flute and dances with the milkmaids of Vrindavan or drives Arjuna’s chariot into battle on the field of Kurukshetra, or, manifesting the feminine aspect of cosmic polarities, is Kali dancing ecstatically on the recumbent body of Shiva, the absolute. Dancing creation, Kali is the Ras Lila beyond logic, reason and adamantine law; without an ulterior motive or overall purpose. The divine Lila is danced in endless cycles of expansion and contraction, creation and destruction.

These are ancient ideas, but the wonders revealed by high energy physics have given rise to world-views in which common logic and rationality are also challenged. Deep within the atom strictly predictable reactions are impossible, and cause, effect and purpose are of no account. Modern theories of the expansion and contraction of the universe coming and going with no purpose other than to be, echo the ancient Hindu one. It seems that the idea of a grand purpose to creation and life is only the product of limited human aspirations.

Within its philosophical context the Ras Lila is contrary to our notions of weighty purpose, fearful seriousness, and heavy profundities. The contemplation of its possibilities is nevertheless far-reaching and lightly profound. It makes it easy to tread lightly with life and not to it take it or oneself too seriously. As life has the nature of play, being playful and humorous is in harmony with it, though it also acknowledges that the trickster, the jester, might upset our plans or cherished notions, producing unsought-for and unexpected outcomes or shunt our life onto unexpected tracks—like a game of chance. It makes one cautious of set-in-cement or died-in-the-wool teachings, ideas, dogmas and concepts and fixed notions of cause-and-effect relationships; thus freeing the intellect to see more clearly what actually is.

So maybe creation has no purpose. It just IS. It is a creative outpouring that has no more purpose or ulterior motive than a happy person has when she spontaneously breaks out in song or starts dancing in joy. If one is silly enough to ask “Why are you doing that?” What can she say except, “I don’t know. I just felt like it!” Like creation itself, such expressions have no purpose or ulterior motives, being a spontaneous out-pouring. Spontaneous dance, song and joyous abandon are a manifestation of the Ras Lila.

The Ras Lila is a lovely idea that makes for lightness of spirit, a playful attitude to life and a realization that its nature is infused with danger, games, fun, joy, wonder and beauty; an antidote to the gloom and doom of a materialistic, rational, me-centred survival-of-the fittest, dog-eat-dog attitude in which the universe is the outcome of quantum mechanics and life an accident of chemistry.

RUSSELL ATKINSON, a retired Naturopath and teacher of Hatha and Raja Yoga, is associated with the Ramakrishna Vedanta Societies in Australia. THEAKO@WESTNET.COM.AU