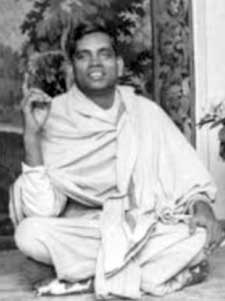 Swami Siddheshwarananda, a student of Ramakrishna’s spiritual son Swami Brahmananda, was head of the Gretz Vedanta Center (Centre Védantique Ramakrichna) from 1947 until his death in 1957. The center is an hour’s train ride from Paris, and has long attracted spiritual seekers from all over Europe, not to mention a number of American devotees. The origins of the center may be traced back to the 1936 centenary celebration in France of the birth of Ramakrishna, which resulted in an accrued curiosity about Vedanta and thus in Belur Math’s decision to send Swami Siddheshwarananda to France. The interest generated by his discourses, including some at eminent French universities, eventually led to the foundation of the Gretz center in 1947.

Siddheshwarananda’s essay entitled “From anxiety to union, or, Ramakrishna’s spiritual experience” (“De l’angoisse à l’union, ou l’experience spirituelle de Rama-krishna1”) contains a number of interesting insights and observations, some of which seem to me to be startlingly original. For example, he finds Ramakrishna’s childlike faith in the vast, variegated and sometimes (to a Western mind) bizarre world of Hindu mythology to be not only a sign of his deep embeddedness in the traditional culture of India, but also, somewhat paradoxically, an indication of a startlingly modern view of the problems of life. Writing with perhaps an echo of the Swiss psychologist C.G. Jung’s defense of mythology as a means of access to the unconscious, Swami Siddeshwarananda sees this rich Hindu mythology as a source of true knowledge about the universe and about ourselves. “Myth is the very foundation of life,” he writes (156).

The modern mind’s rejection of mythology as a source of inspiration and faith has deprived it of a great aid to spiritual struggle.

The modern mind’s rejection of mythology as a source of inspiration and faith has deprived it of a great aid to spiritual struggle. Reality can be understood as both rational and irrational. Science and logic deal well with the rational side, but mythology enables one to handle the power of the irrational side of things as well. Thus Ramakrishna’s childlike and even medieval faith in the many armed goddess Kali, with a lion as her vehicle, with both loving and frightening attributes, proved to be neither an immature nor an anachronistic attitude, but rather a token of the highest modernity and sophistication, since it enabled him to fully access the irrational side of existence.

Since at least half of life is thoroughly irrational (psychologists would say “unconscious”), his appreciation of mythological as opposed to conceptual thinking enabled Ramakrishna to deal with life and its problems across the full spectrum of its rational and irrational dimensions.

Siddheshwarananda sees Ramakrishna’s specific worship of the Divine Mother Kali in particular as highly significant. In realizing the full symbolic dimension of the Divine Mother, Ramakrishna realized “the totality of cosmic energy” (162) and “the secret of Her maya;” in other words, he discovered “the secret of the entire created universe.” (162) Siddheswarananda sees this realization as surpassing all other types of spiritual realizations, even nirvikalpa samadhi, which one normally assumes to be the last and highest realization. But, if nirvikalpa samadhi is seeing Brahman with eyes closed, Ramakrishna’s ultimate realization included seeing Brahman with eyes open. This experience had enormous consequences for his life and teachings. Seeing the divine not only present in the totality of the universe, but as identical with the whole universe, “allowed Ramakrishna to identify completely with those who approached him, to feel their anxiety as though it were his own” (170).

How did this very special and unusual realization come about? In answering this question Siddheswarananda once again proves to be an original thinker. “This realization was not the result of any spiritual discipline,” he asserts provocatively. What are we to think of such an apparently paradoxical statement? Siddheswarananda justifies his position, however, in a clear and logical fashion. The highest realization cannot be the result of any causal chain, since all cause and effect relationships exist only within the world of illusion; the highest realization is on another plane altogether. He uses the analogy of the dream state and the waking state to clarify the issue.

We may imagine that we pass from one state to the other, but our actual experience tells us that the dream state and the waking state constitute two different and disconnected spatial and temporal realms. There can be no “passage” from one to the other. It would thus be nonsensical to say that we “had a dream at 8am,” because clock time exists only for the waking state; the dream state has its own separate time zone, so to speak.

Similarly, spiritual struggle takes place in time and space. However, the highest spiritual realization does not; it “takes place,” so to speak, in no time or space dimension whatsoever. In other words, the realm of spiritual struggle and of lower forms of mystical experience has no point of contact with the highest realization, and so there can be no “passage” from one to the other, since no causal relationship exists between them. That is why the common notion that Ramakrishna’s extreme anxiety to realize the Divine Mother was the cause of his sudden realization—that, feeling intense longing and spiritual despair he was about to cut off his own head, this intense spiritual fervor triggered his full realization of Kali—actually makes no sense. In spite of appearances, Ramakrishna’s spiritual struggle and anxiety had no causal connection with his highest realization.

This is surely a daunting proposition, since, if such was the case with Ramakrishna’s spiritual realization, why should we even bother to practice spiritual disciplines? Because it is our spiritual anxiety, answers Siddeshwarananda (probably using the term “anxiety” in a loosely Sartrian sense2, that forces us to practice such disciplines; in a world in which we are compelled by nature to act in all kinds of ways, we are also compelled by our anxiety to act spiritually. But practicing spiritual disciplines can only result in the passage from lower states to higher states, which may, of course, include various forms of what one calls mystical experience.

By contrast, the highest realization itself cannot— even to the slightest degree—be produced or induced; it is forever beyond any causal connection with the world of maya. The highest realization may thus be said to manifest itself freely, of its own sweet will; it can never be forced into manifestation by human endeavor—not even by the most intense and sincere spiritual effort. It is even ultimately illogical, writes Siddeshwarananda, to speak of the ‘highest’ realization. It is an ingrained habit of the intellect to establish hierarchical relationships between things: this is higher, this is lower. But, in the case of Ramakrishna’s supreme realization, such hierarchical categories simply do not apply.

Ramakrishna’s realization was special in that he identified himself not only with the heights of spir itual knowledge, but also with the depths of cosmic ignorance. In that sense, his supreme realization can be said to be, not the highest, but rather beyond all measure. “This is why we can say,” concludes Siddheshwarananda, “that, in the manifested world, beings like Ramakrishna, who have the unique gift of identifying themselves with our states of ignorance, are much great-er than those who have left the state of ignorance, and remain in a state of bliss” (171).

1 The essay is to be found in Marc de Smedt’s book Ramakrishna: un sage en Inde (Paris: Le Courrier du Livre, 1986), pp. 155-171. To the best of my knowledge, the essay has not yet been translated into English.

2 Jean-Paul Sartre’s existentialist treatise Being and Nothingness (1943) was enormously inf luential on French intellectual life during Siddheshwarananda’s later years in France. In Sartre’s existentialism, “anxiety” (angoisse) exerts a constant pressure on human beings to keep on trying to do the impossible, i.e. to make their freedom as conscious subjects—their being-foritself— merge with the stability and object status of being-in-itself. Such an impossible project, wrote Sartre, is a “useless passion,” since, to put it simply, the subject can never become an object.

STEVEN F. WALKER has been associated with Vedanta centers in Boston and New York for nearly forty-five years. He teaches comparative literature at Rutgers University.