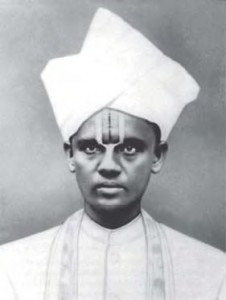 This short biography of Swami Vivekananda’s South Indian disciple Alasingha Perumal will be of particular interest to Swamiji’s English-speaking admirers. Anyone who has read more than a cursory biography of Vivekananda has come across Alasingha’s name in connection with Swamiji’s travels in southern India and the many letters Swamiji wrote to this disciple. But we don’t find much about the disciple himself.

The efforts of Alasingha on behalf of his Master were nothing short of heroic. It is fair to say he worked harder and did more to promote Swamiji’s work than anyone else in southern India prior to the arrival of Swami Ramakrishnananda in 1897. Before Vivekananda reached Madras at the end of 1892 and met Alasingha, the latter had formed a group of friends dedicated to preserving India’s spiritual heritage. Ironically, he heard about the upcoming Parliament of Religions in Chicago through Christian missionary newsletters. Learning of Swamiji’s arrival in Madras from a relative, Alasingha went to meet him and immediately recognized Swamiji as his longed-for teacher. From that moment on, he lived only to serve Swamiji.

Alasingha strongly urged Swamiji to go to America and attend the Parliament. He organized a meeting of friends, where a formal request was made to Swamiji to go as the Hindu representative. Alasingha and his friends were willing to go door to door to raise money for Swamiji’s passage. Touched by their sincerity, he agreed to go, but still hesitated, waiting for a clear sign that the Divine Mother wanted him to go. He repeatedly declined and returned money collected for his journey. Finally, receiving unqualified support and blessing from Holy Mother Sarada Devi, his guru’s wife and successor, he made definite plans to go.

Before Swamiji sailed from Bombay, Alasingha came there with difficulty and rendered last-minute service, persuading Swamiji to get a watch and having appropriate clothes made for him.

Even before reaching America, Swamiji wrote fiery letters of inspiration to Alasingha, and through him to his other followers in South India, exhorting them to work for India’s uplift and telling them of what he learned abroad. Once in the United States, he quickly ran out of money and cabled for financial help and also with news of his rough treatment by some people. Alasinga now felt guilty for having urged Swamiji to go, and begged and borrowed funds—even sold his wife’s jewelry with her glad assent—to send money to Swamiji. Soon Swamiji found friends in America who appreciated his worth and were able and willing to give him assistance.

But Swamiji’s real trials began after his tremendous success at the Parliament, when lies and rumors were spread by jealous adversaries to discredit him. He needed his friends in India to vouch for his bona fides. Alasingha organized meetings and contacted important people to publish appreciation and thanks to Swamiji, informing people in America of Swamiji’s credentials. Letters were sent to American newspapers, and they were published. The American press knew well of Swamiji’s appearance and influence at the Parliament. The New York Herald even published a collection of Sri Ramakrishna’s sayings submitted by Swamiji’s American disciple, Swami Kripananda.

That same year (1894) he founded the Young Men’s Hindu Association to counter the inroads of Christian missionaries and to raise up the exploited masses. The following year, at Swamiji’s urging and with help from friends, he founded the journal Brahmavadin and struggled hard to keep it going in spite of financial difficulties.

Along with the story of Alasingha’s life, Swami Tathagatananda gives numerous quotations from Vivekananda’s letters. These letters give us vivid glimpses of Swamiji’s life and mind as he struggled to fulfill the mission entrusted to him. They also convey his deep love for and faith in his disciples.

Not much information is given about Alasingha’s later life. Brief mention is made of the important part he played in organizing the unparalleled, ecstatic reception Swamiji received on his return from the West in early 1897. Alasingha passed away in 1909 at the age of 44.

Swami Tathagatananda is to be thanked and congratulated for making the life of this great disciple of Vivekananda more widely known.

Swami Tathagatananda is Minister-in-Charge of the Vedanta Society of New York.