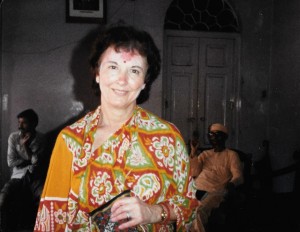 Jean Ayars Pohli, known as “Vandana” in Vedanta circles, passed away peacefully on Monday, May 19, 2014. She was a native of Pittsburgh, Pennsylvania, the only child of Robert and Gertrude Ayars, both of whom were professors at the University of Pittsburgh. Jean graduated from Knox College in 1951, became a teacher, and lived in Pensacola, Florida. It was there that she met and married her husband, Dick. Soon after, they started a family, adopting two children: Bob in 1956 and Krista in 1960.

Being married to a Navy Captain allowed for travel all over the world and for many extraordinary experiences. While in Japan, Jean taught English to Japanese TV personnel. They lived in India twice, first when Dick was an exchange student in Wellington, Tamil Nadu; then in New Delhi, as members of the Diplomatic Corps.) Prior to her second stay in India (1974-77) she became involved in the Vedanta group in Washington, D.C., and when she arrived in New Delhi she closely associated with the Ramakrishna Mission and its then head, Swami Vandanananda. She was a disciple of Swami Vireshwaranandaji, the then President of the Ramakrishna Order. He treated her like a daughter, and she would visit him yearly until his death in 1985. She visited many parts of India, made numerous pilgrimages, including Puri, Kumbha Mela, Kedarnath and Amarnath. She also had audiences with His Holiness the Dalai Lama and Mother Teresa. When her husband got his final posting to Treasure Island (in San Francisco), considered a premier post, one of his Indian colleagues said it was because Jean was a devotee of Sri Ramakrishna.

Following retirement, Jean and her family returned to Mill Valley, California. For many years she returned to India, to continue her studies of Vedanta and to explore her beloved India. She attended the Vedanta Society in San Francisco weekly for many years. She visited many of the Vedanta Societies in the US and attended special celebrations and was close to many swamis. After her divorce from Dick, she moved to San Rafael and was involved in many activities. She attended Spirit Rock, was a member of the Marin Poetry Center, and took classes at College of Marin. She belonged to poetry groups, women’s groups, numerous meditation and spiritual study groups, and was “one of the boys” in the Brown Bagger philosophy group, where she often made presentations on Vedanta, Hinduism and India. She later found her spiritual home at Unity in Novato, Marin County.

Jean loved to learn, to expand her mind and her spiritual perspective. One of her greatest gifts was her love of people! She was an incredible source of joy and support to many. Vandana was devoted to both Sri Ramakrishna and the Divine Mother and showered her love and affection on others, while remaining detached, with a wonderful sense of humor, a smile on her face and a sparkle in her eyes.

She is survived by her daughter and son, five grandchildren, and three great granddaughters. A Celebration of Life was held on Saturday, May 31, 2014, at 4:00 pm at Unity in Novato.

AMRITA SALM, Ph.D., served as editor of A Portrait of Sri Ramakrishna, a translation of Sri Sri Ramakrishna Punthi. She is the author of Mother of Mayavati: The Story of Charlotte Sevier and Advaita Ashrama. Ms. Salm is a founding board member of Vivekananda Retreat, Ridgely; Carpinteria Cares For Youth; and HopeNet of Carpinteria, a grass-roots suicide prevention organization. Presently she is doing research on Sarah Ellen Waldo and is interested in the challenges and accomplishments of Swami Vivekananda’s female Western disciples. Email:motherofmayavati@gmail.com.