Author’s Introduction to Part 2 of
“Mahatma-to-be and the Mahatma-maker:
Gandhi and Rajchandra” 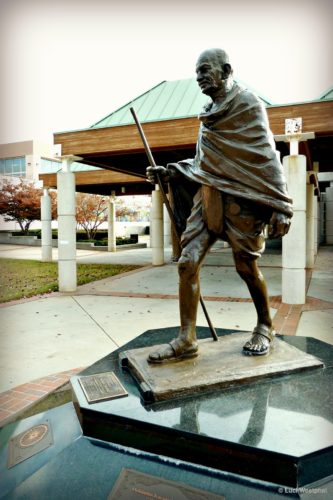 In the previous issue (AV #71) we talked about a rare rapport between Mohandas Gandhi and Shrimad Rajchandra — a multi-talented young Jain businessman-cum-a precocious poet who was, above all, a “mumukshu” — an ardent seeker after truth with an irrepressible yearning for God, for self-realization and moksha or liberation from all worldly attachments.

To Rajchandra goes the honor of being Mohandas Gandhi’s “first teacher and mentor;” he tapped into his young friend’s as yet unarticulated spiritual potentiality, to help it grow and later to even blossom into a full-fledged “Satyagraha.”

They had a unique relationship.  What Shri Krishna was to Arjuna in the Bhagavad Gita, Rajchandra was to Gandhi — a soul-mate, a trusted friend, a spiritual teacher-mentor and also a rescuer in crisis of faith.

We also discussed Rajchandra as a religious reformer who was pained deeply by irreligion masquerading as religion, hypocrisy and senseless inter-religious bickering. Gandhi was profoundly influenced by his mentor’s bold views on “religion” which he defined not as an “ism,” but as “an inner attribute of the soul.”  They saw eye to eye and soul to soul on making religion an integral element or “dharma” of life.

In this issue, we fully discuss “What is Jainism” — its major precepts and practices, and its three theories. Gandhi as a child was first exposed to the ain disciplines through his pious mother Putliba.  Later, after coming in close contact with Rajchandra, Gandhi’s predisposition to asceticism was further strengthened by this teacher who reinforced it by his own rigorous experiments in: ‘diet and brahmacharya,’, ‘brahmacharya in marriage,’ ‘palate-control,’ ‘fasting,’ and by introducing another big dietetic restriction of “giving up of milk ‘ which was believed to be arousing carnal passion.  Gandhi directly picked up this particular diet-restriction from Rajchandra.

Satyagraha:  We also have a full-fledged explication of Satyagraha founded on three pillars: Satya, Ahimsa and Tapasya. Gandhi was the first to translate his mentor’s ethical-spiritual discipliners into a concrete political-social program or Truth-campaign.  Rajchandra’s teachings served as his main inspiration to undertake this “Bhagirath-karya” or “Herculean task.”

“Raychandbhai — My Refuge in Spiritual Crisis:”  In this we examine why Gandhi said he was eternally grateful to Rajchandra  for resolving his doubts about Hinduism, as well as for convincing him about the incomparable depth, breadth and  philosophy of Hinduism (Vedanta) —which literally saved him from converting to either Christianity or Islam.

“Three Spiritual Contestants — Tolstoy, Ruskin, and Rajchandra:  Who wins the battle for Gandhi’s soul? We discuss number of reasons why Gandhi’s garland of choice was offered to Shrimad Rajchandra; here, however, it will suffice to give only two most important reasons spelled out by Gandhi himself: “Compared to the writings of western thinkers (Rajchandra’s) writings were more penetrating, expressive, and illuminating…The religious experiences of Rajchandra surpassed those of the two Western) thinkers.”  (Gandhi’s letter to H.L.S. Polak).

This concludes the article.

Uma Majmudar, a member of the Vedanta Center of Atlanta, is the author of Gandhi’s Pilgrimage of Faith: From Darkness to Light. She has taught courses in religion and philosophy at Emory University and is currently leading classes on the Bhagavad Gita at Spellman College. Uma can be reached at majmudaruma@gmail.com.