My Experience with Vedanta 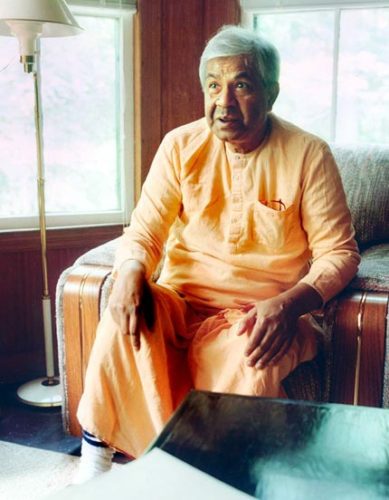 When the editor of this magazine asked me if I would be interested in contributing an article describing how I got introduced to, and, my experience with Vedanta, I was happy to oblige.  To accurately recollect and document the events and circumstances that led me to Vedanta and the journey is not an easy task. I would say that Providence and my past Karma must have had much to do with how I came to Vedanta. It was undoubtedly the single most important event in my life. After many years now, I see it as a treasure greater than anything else I could have ever found. And, the blows of life have given added meaning to the importance of Vedanta and its teachings.

Strangely, despite growing up in India, it was only after traveling around the world that I was introduced to Vedanta. While in India, I knew virtually nothing of it. There, I only knew about the ritual and mythological aspects of Hinduism.  As a youngster, I remember attending temple ceremonies, pujas, and my mother’s devotional practices and her faith in worship. But the sentimentalism of popular Hinduism did not appeal to me. There was a lot of apparent devotion but little knowledge.  It was later when I came to America and heard a talk given by my future teacher Swami Adiswarananda in New York, I heard these words, “Philosophy without devotion is dry intellectualism. Devotion without knowledge is mere sentimentalism.”  Right away, that made sense to me.

While my deeper understanding of Vedanta was nurtured by my beloved guru and my current teacher, Swami Yuktatmananda, I was first introduced to it when I was a student at Rutgers University. There, I signed up for an elective which was an introduction to Eastern religions taught by my American host, Dr. Cyrus Pangborn.  I thought that the course would be easy to ace because of my Indian background. Plus, I figured, it’ll save me from embarrassment while conversing with Americans who knew more about my religion than I did! As part of that college course, the professor had invited a monk from a Vedanta Center to give a talk on Hinduism. The swami’s talk had a tremendous impact on me. His talk was different from the talks given by all other speakers on campus. He was gentle, kind, sincere and of humble demeanor.

After the class, I had an opportunity to interact with the swami. That interaction created a desire in me to learn more about the Upanishads, but I found it difficult to make sense of it at the time. Sometime later, I came across a copy of the Gita on a day when I was depressed and feeling apathetic. The first verse that jumped out at me, as soon as I opened the book, was this: “Give up all Dharmas (of the body, mind, and intellect), take refuge in Me alone; I will liberate you from all sins; grieve not.”  I read it and re-read it. I was so impressed with that verse, I began to read the Gita regularly. But reading the Gita without guidance can become a dry intellectual exercise and lead to confusion.

A few years later, I visited New York’s Ramakrishna-Vivekananda Center on 94th Street between Madison and Fifth Avenues. There, I listened for the first time to Swami Adiswarananda’s talk. It was an eye-opener. The Center was different from any other Hindu place of worship I was familiar with. The place looked more like a church than a Hindu temple except for the shrine inside, but I did not mind it. The swami’s discourse was also different from most other discourses I had heard. I must admit though, some of what Swami Adiswarananda said in his discourse was not easy to accept. A lot of it contained harsh truths that my mind was not ready for it at the time.  But in my heart, I knew I had found a place where true religion is practiced, and truth is spoken.

A few years after attending my first talk at the Center, I began to be a regular at the New York Center. By then, life had dealt me enough blows and humbled me to want to surrender to a Higher Power more than ever before. In the beginning, I did not know that initiation was an important step leading to spiritual growth. It wasn’t until a friend suggested that I take initiation and he requested Swami Adiswarananda to do so. The swami agreed without question. The day of my initiation was one of the most memorable events of my life and that whole day I experienced a level of bliss that I had never known. During the initiation, Swami Adiswarananda showed me how to pray and meditate. He pointed to my heart and said, “Everything you are seeking is right here; all knowledge is here.” He walked me through the initiation steps and gave me a secret mantra with instructions. For me, this turned out to be a life-changing event that instilled in me a commitment to regular spiritual practices.

After the initiation, Swami Adiswarananda officially became my guru. He was an extraordinary teacher. He did not mince words. His humor, which he used to drive important spiritual messages to his audience, is unmatched by any other monk of the Ramakrishna order. His message was simple: You must know reality and quit fantasizing about life. Life is hard, miserable and not meant for enjoyment. It is meant to teach you a lesson. Take it seriously. In one short talk, he helped me to understand that Vedanta will teach me Reality. He also made very clear there are no shortcuts to this knowledge. While it is hard work, there is a simple way to approach it if you desire self-knowledge. I walked out of that talk pleased but also realizing how little I understood about my religion and spirituality in general.

Why did I stay?

While the biggest force behind my staying was my guru, I also stayed because I was convinced that I had found something that was an answer to all my problems. There was a period of difficulty trying to get my mind to stick with it. The teachings of Vedanta took away my interest in finding intellectual solutions to spiritual problems. I learned about the relationship between mind, body, the universe, and God. I realized how I was looking for answers to my problems in the wrong places. When I read Swami Vivekananda’s Complete Works for the first time, I did not want to stop because I felt Swamiji answered with immense clarity all the questions I would ever want to be answered.

The next thing that has kept me in Vedanta is the purity of the Ramakrishna Order. Our Center represents that purity in many ways. The Ramakrishna Order happens to be a rare socio-religious organization and spiritual movement that has survived for more than a century without any taint or scandal to its name.  It is also one of the few Vedanta teaching centers that refuse to dilute its teaching; it does not attempt to bring the ‘higher to suit the lower’, while effectively spreading the message of Vedanta worldwide.

The Ramakrishna Order does not promote itself, but devotees come to it out of attraction to its teachings. The Center does not offer shortcuts. It is a place where sincere devotees can take refuge in God and be relieved of the world’s miseries. It is a sanctuary of peace and serenity.  When I am there I can set aside the world and become immersed in a spiritual mood.  To be able to attend the classes at the Center, pray and meditate regularly has been a solace to my life for many years. The presence of Swami Yuktatmananda, the current teacher and the dedicated monastic members is a gift I feel blessed to receive.

How has it transformed my life?

I cannot express fully in words the treasure that my guru shared with me. Some of the most important teachings of his came while being in his presence, watching his silence, feeling his compassionate spirit and observing his devotion to Ramakrishna.  My present teacher, Swami Yuktatmananda continues that tradition of teaching.

My guru, Swami Adiswarananda repeatedly emphasized that Knowledge of the Self alone will make me free. His talks had an element of showing that ignorance was the cause of all my problems and that the confusion in my mind had been distorting my life and preventing me from reaching my goals. This had to be undone. The self-inflicted mix-up had to be removed to know who I really am.  The mind must be purified, and reality understood. Having the answer to the question “Who am I?” is the final answer to all problems.

He also cautioned that there is a time factor in everything. One must be patient and do what is being suggested. The teacher can only show his student the way. Spiritual growth must be earned through one’s own efforts. The disciple must work for it, purify the mind and make the appropriate sacrifices. When discussing my business problems, he would say with his usual sense of humor and wit: “You cannot expect to have Jesus Christ for your board of directors”. He stressed the importance of devotion to God after all. And, what was started by my guru continues today under an equally competent and beloved teacher, Swami Yuktatmananda.

Getting introduced to Vedanta and the Ramakrishna Order, finding my guru, getting initiated, and the regularity in spiritual practices have had a profound impact on my life. It has helped me change the way I see myself, others, and the world — benefits of which are amply evident to me every moment. Vedanta has given me a clear roadmap and the tools necessary for character transformation and achieving the true goal of human life. For that, I am eternally grateful for the blessings of Vedanta, Sri Ramakrishna, and my Teachers.

Krishna (Krish) Shetty is a software entrepreneur. He is an active member of Ramakrishna-Vivekananda Center of New York. He can be reached at krish.shetty@gmail.com.